List of Cable TV and internet Service Providers in YongSanGu, SEOUL
around iTaeWon, South of the main shopping Street :

Please take this as a general guide, for as will be explained later : you could only verify exactly whether the fastest line into your building ONLY when the install-man comes to your place, as more buildings are being connected constantly, but a few general rules may apply :

first understand how television, Cable TV and internet access is provided in the whole of South Korea at
http://koreatechblog.com/telephone-cable-tv-isp/

and this Post is a good FOUR years later, for connections specific to iTaewon region, which is considered a relatively “old” town, as new development plans are under-way (but again, after such prospect, actual reconstruction usually comes a decade or two later IF it does). meaning : you won’t be endowed to the latest technology the now-advanced nation has to offer – mostly concentrated in the new high-rise buildings in KangNam, in the the Capital or in case of the Port City of Busan or Pusan on SooYoung Peninsula between GwangAnRi and HaeUnDae Beaches .

and now a good FOUR years after the influx of iPhone the major change is that cellular carriers, which often are conglomerates with Cable TV AND internet service also – offer discounts as a package . so this will include :

plus more discount, if two or more members in this house-hold use the same carrier 😉 fine, but there are individual compatibility AND speed to consider, such as :

[ PRICE ] is roughly the same throughout companies offering similar service, and much competition they will cash-back almost W200,000 on a THREE-year subscription . NOT many expatriates stay this long in a single location, but again they seldom check who is who, so it is common among foreigners to pass-on their subscription to the next new incoming tenant .

a Cable TV-and-internet package would cost approximately W30,000 per Month for normal, then W40,000 for Premium (faster internet) with basic Cable TV channels, which is most of what you will need only excluding pay movies and (softcore) adult channels.

following is TV-and-internet package Monthly prices, for a THREE year subscription, available in iTaewon, YongSan during Summer 2013 :
( where the only difference between Light/Economy – Normal/Basic – Premium
would be internet connection speed, than TV channels )

and a more precise comparison on each companies’ internet option :
– CNM provides cable AND internet access for Eastern SEOUL including downtown and YongSan
– SPEED mentioned below are advertised numbers NOT to be trusted, for down-load/up-load
– Monthly price listed are On-Line reservation discounts AND includes 10% VAT value-added tax
– they will mostly charge you for SET-UP AND modem rental, unless you sign-up for yearly plans

actually Cable TV companies offer the same program, with companies endowed the right to serve specific areas throughout South Korea . so one area will only have a single Cable TV company to sign-up to, but then you will have a handful of cellular carriers and/or internet service providers providing TV service also, plus SkyLife which is satellite – and they all offer somewhat different programs, so here you will have to choose . today they begun to call this ipTV, providing TV, internet and all sorts of related service including On-Line banking, short of cooking dinner for you 😉 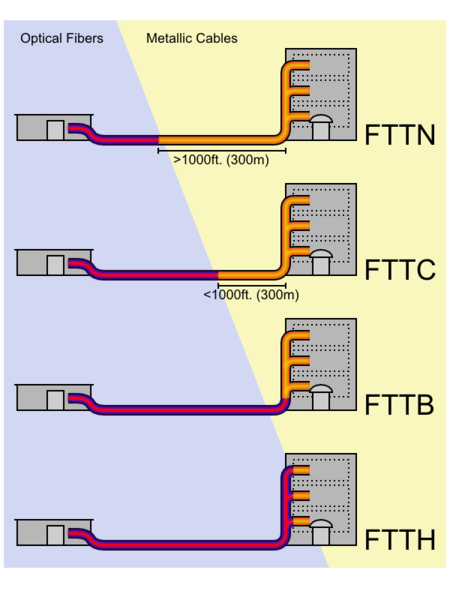 as South Korea reigns as the land with the FASTEST domestic internet connection on planet Earth, one concept you should understand well illustrated in this diagram . while contents on the internet is in essence virtual reality, connecting to it FAST is possible through physical state-of-the-art optical cables . it is rather easy for such a service company to lay these cables near their head-quarters or in a new construction site, but harder this is more as you dwell in older neighborhoods, and more so further from metropolis with concentrated population . so somewhere along the line, this is going to be a “combination” of new FAST cables and older slow ones . to counter this, most companies try to “boost” signals through specific modems BUT do NOT get near lines connected 100% with new optic cables, and is bound to be unstable .

[ iNTERNET CONNECTION SPEED ] is generally universal within South Korea, with major difference on whether the physical cable coming into your building will be partial optical-and-metal OR all-optical .. so this differs upon region, but here for iTaewon, YongSan ( speed listed here are maximum thus Premium price, and cheaper ones sort-of blocking signals duh )

[ SUPPORT AND REPAIR ] as mentioned earlier of fierce competion between a much-similar service providers, they will dispatch a repairman within a few hours of your call, even on WeekEnd !

Thank You for the input, and it would help if you mention which geographic area this is AND what kind of building – as it really matters, plus it would differ depending on time-of-day . But looking at your numbers : you may have signed-up for a plan in a region where they don’t offer that (it may be in small print on the contract). further-more : call-in their technician if you are in any way NOT satisfied, for it is in their interest to provide you with fastest-and-stable connection, amid so much competition nowadays //

1.although You, yourself can get direct contract with local internet service provider, because you are a legal (temporary) resident in South Korea AND should have an Alien identity Card AND Number
2.but the simpler and more common way that most short-term travelers and temporary residents use :
is to rent a room, apartment or house that is already subscribe to the property’s owner
– where the owner automatically pays monthy bills, and you repay him or her the same amount every Month //

Do we have to get the internet connection from the olleh tv box? Or they provide a wifi connection? I have connected a lan cable to tv box and internet works fine with my lap… how will it be charged? Because i dont have a paid wifi connection in my room.

To get tv service we just need to go to a olleh store and ask?

Cable TV and internet connection depends much on your regional area : 1.like which kind of physical lines are dug or hung in your neighborhood (the more recent the faster) and 2.how many companies compete, thus offering much discount . it is best to ask neighbors than even search on-line on this //

Do we have to get the internet connection from the olleh tv box? Or they provide a wifi connection? I have connected a lan cable to tv box and internet works fine with my lap… how will it be charged? Because i dont have a paid wifi connection in my room.

(1) normally : first you get a LINE subscription, and then can attach your own wireless router to enable Wi-Fi.
(2) however if you do not know how to do this : you can ask for connection WITH Wi-Fi from the start, which would cost more .
but know option (1) above will be cost less in the long-run