KCDC Korea Center for Disease Control and YongSan Police Station in accordance with YongSan Gu Administration Office and SEOUL City Office is in search for 3112 people who had been to iTaewon clubs mentioned three days ago on previous Post, but cannot be contacted . they are confident to find all through cell phone carrier and closed-circuit television records, especially as special team of 2162 police task-force has been investigating it – but time is the essence as they might spread the virus through this time . thus announcing all come forward willingly . actual name may not be revealed if you do .

notably: anyone who has been to iTaewon bars and clubs including King Club, Trunk, Queen, Soho and Him clubs between last April 30 Thursday and May 5 Tuesday .

telecommunication companies are searching for signals lasting more than 20 minutes around the area during these dates and time, while police are looking over CCTV recordings originating around those clubs .

not-answering your phones may not be pursued legally, but problems arise if you eventually effect another person or institution as a whole – currently finable up to W2,000,000 depending upon regional jurisdiction, but more-so will be lawfully sued for much more up to W200,000,000 for damages incurred . 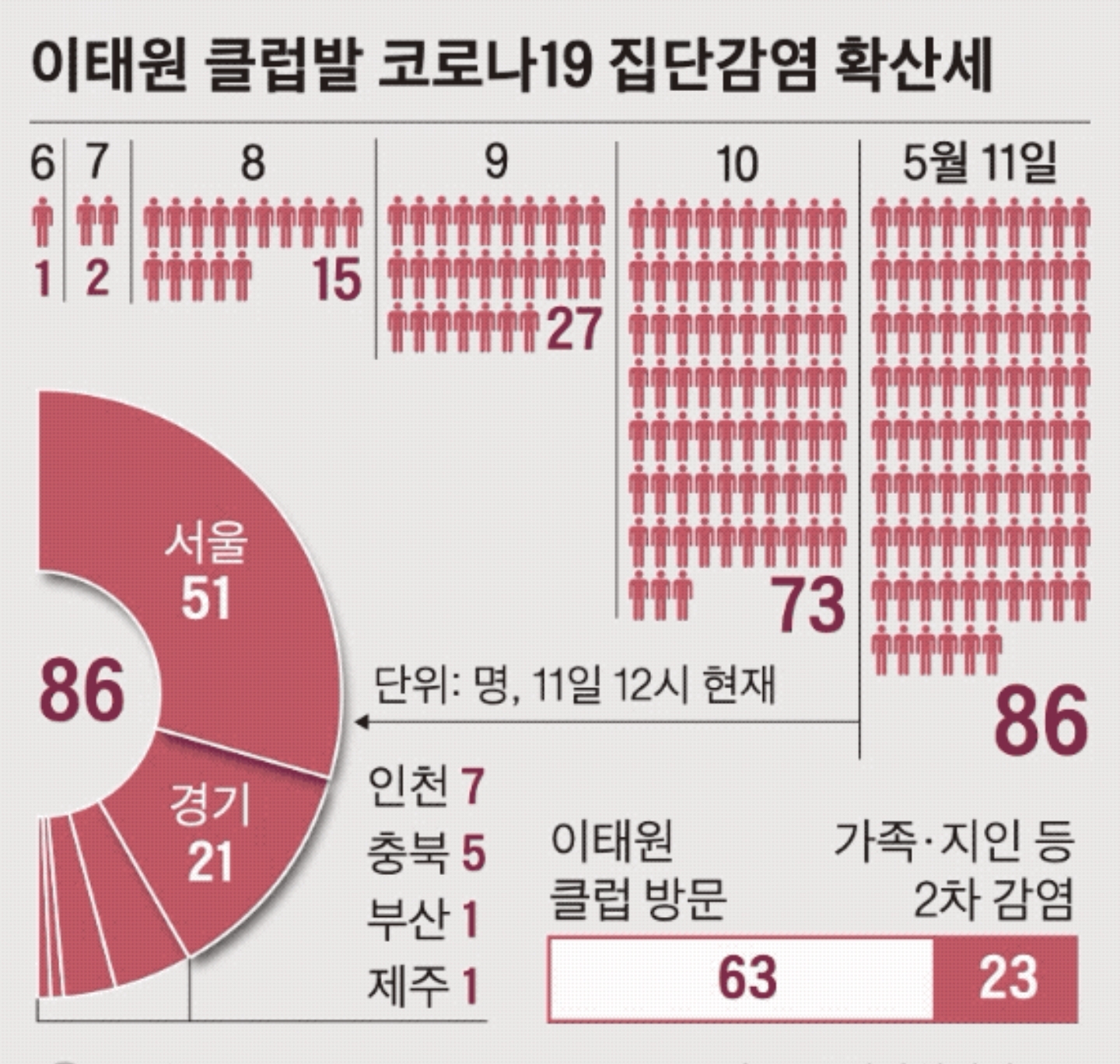 why the forceful steps and harsh penalty set-up ? it is scary to realize one single person checked-out several bars and clubs in iTaewon in six hours over mid-night to trigger the second major out-break of COVID-19 in South Korea since February (from a religious sect gathering), just when newly infected numbers had dropped to zero for consecutive days and citizens were beginning to loosen-up on distancing and staying-home .

more-over over 15 percent of 5517 attendants in question are foreign nationals working as English throughout the country, where Koreans put hard emphasis on their children’s education for the betterment of their whole family . many are criticizing the actions of partying and gathering secretively without protection, but clearly short-of blindly-discriminating ShinCheonJi Church and homo-sexuals – while they themselves work-hard to support their children and home .

( May 12 Tuesday evening update ) SEOUL City Mayor has accentuated from yesterday Corona Virus test will (unprecedentedly) verify only cell phone numbers in place of the person’s identity . largely due to this people have been queuing-up in line has increased double for three consecutive days .

( Wednesday update ) a college senior who has been at iTaewon King Club last Weekend on May 2nd and 3rd tested Positive and lied while questioning said was unemployed, only to realize several junior and high-school students at the institute in inCheon where he had been teaching and their family members now testing positive too after suspicious authorities tracked his previous where-abouts . he even attended to teach at school without mask even though it was school policy . The City of inCheon hence is sueing this person for intentful harm . soon afterwards a high school senior is found to have attended these adult-only clubs and the whole education system nation-wide is considering to delay opening school due this recent out-break, especially onto schools .

Three Corona Laws passed in February where subject who lies to tracking investigation can be set up to two years in prison and fined up to W20,000,000 according to transmittable disease prevention law, plus up to five years of prison sentence possible if “disturbing government duties” is applied .

by day’s-end inspectors have found a pattern of iTaewon clubbers, going to alcohol-serving places in JongRo and NakWonDong, all around SEOUL Subway Line 5 JongRo 3-Ga Station mostly Exits 3, 4, 5 and 6 . close-by one more station East on another Line 1 is another gay area of JongRo 5-Ga .

( May 14 Thursday update ) a daily newspaper in ChungJu City of ChungCheong BukDo Region in the center of the South Korea : wrote an AiDS patient was discovered in the process of testing a person who had been to iTaewon clubs, where KCDC stated they cannot verify this as AiDS is not in their duty process – while the Regional Administration neither, but announced they will not reveal such information even if they had confirmation – from the AiDS Prevention Law revised in 2008 disbanding patient record and report //

( May 27 Wednesday ) it has been a good three Weeks since the first infectee has been identified to have spread this Corona Virus at King Club in itaewon to widen onto surrounding clubs then further clubs, rest-rooms and coin karaoke in HongDae, JongRo and GangNam . all have come just when new domestic infections were recording zero in a row, and now witnessing seventh-tier infection from the original patient at King Club, the demographics have changed as age-wise in their twenties take-up 40% of effected-positive to spread to elders in sixties which amount to 16 people . among which those lying about their where-abouts and/or breaking quarantine orders are either extradited-out of South Korea and/or legally sued for damages . and as continuing infection are spreading among teachers and religious groups further strategies are being formed .