banks take on a new meaning in neighboring YongSan, iTaewon and HanNamDong . with Google and iPhone maps lagging behind, the two most extensif local PC maps Daum and Naver both (with live traffic) have bank-mapping option . also a few smart-phone apps can keep you always connected, but NOT mentioning here because recommendations change as they and OS are updated .

aside from the core business area around MuGyoDong in the heart of old downtown SEOUL and the new business district South of the Han River along the YeokSamDaeRo axis running West-East, this YongSan, iTaewon and HanNamDong banks do lots of overseas transactions, but NOT to say all clerks in this area speak fluent English, short of any other language . 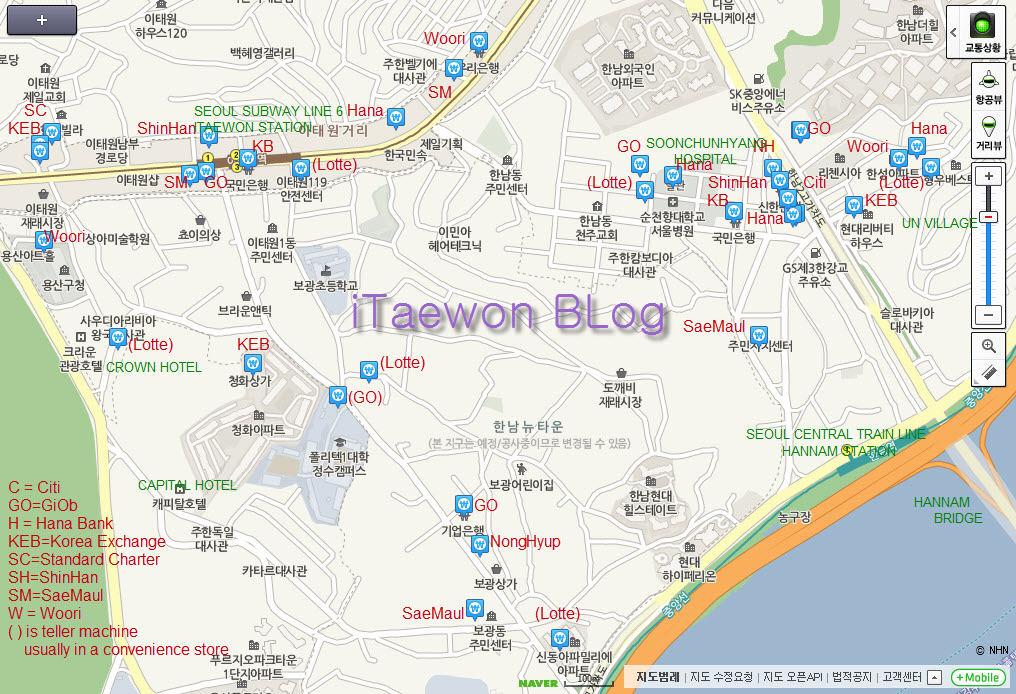 still among all the bank branches on the map above, KB KukMin Bank at SEOUL Subway Line 6 iTaewon Station is the most crowded, almost all-day understandably becayse it the only one here right in front of a subway station exit, in this case Number 3 . AND the clerks speak quite-almost fluent English 😉 but then again, I like try to inform the Arab greeting to every teller I come across in this neighborhood, because of what this iTaewon Hill symbolizes to the Middle-Eastern community who have set foot and some settled since the end of Korean War //

then in contrast : you could say those deep in apartment complexes such as KEB Korea Exchange Bank in the shopping building of ChungHwa Apartments – a long-time expatriate and Korean-American residence, are close-knit operations where loyal customers and clerks are accustomed to each other . and if you frequent a certain bank, they will often discount their own commission on exchange rates .