I live in iTaewon :

the very place where Korea’s first fried chicken outlet ‘Western House’ opened shop long~ before the Colonel (of Kentucky Fried Chicken fame) set-in early 70’s .
and now post-Millennium where G.I.s, LGBT (Lesbians, Gays, Bi’s and Trans-Sexuals), Africans, Arabs, hungry English Teachers and curious Koreans cross path, yet co-existing in peace – even though the black guys hanging out after sun-down in the middle of the African alley AND the MP’s poised at the police station right across Hamilton Hotel and before the Fire Station seem intruding .. well, at least they now have a female officer there to soften the whole image – actually quite a number of police stations now do, even at BoGwangDong, the humbler hill-side alley heading down South to the Han River .

iTaewon Police Station : Seoul Subway Line 6 iTaewon Station Exit 3 and you are there, smack in front of iTaewon police station .. letting you know all this ain’t gonna get out-of-hand . now take the first Right turn up-hill .. 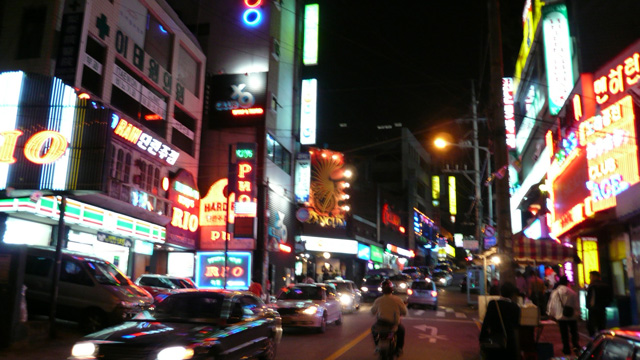 the photo comprising the top title bar of my iTaewon page shows the baddest alley in the long-time shopping district : pin-pointing the indian restaurant operated by one of the earlier families to settle in the Capital of Seoul, South Korea and the infamous King Club whose walls would tell history of a long~ line of G.I.’s who came in the name of stabilizing the country – Thank You . whose whole block is sandwiched by another infamous Hooker Hill, Gay Alley then up to Central Mosque (all three alleys turning Left) where Arabs have called home since the Korean War .

perhaps that is why the suave French have now moved South, across the Han River to set up on their own hill on SeoRae Maul (Village) much like they have on another this time by-the-sea on DalMadHee Hill along the shore of HaeUnDae Beach at the South-East corner of the Port of Korea’s Port : Busan or Pusan (spelling-corrected after the 1988 SEOUL Olympics) 😉

this was also the baddest place in the Peninsula, when everything was prohibited by consecutive harsh military regimes over the hip sixties and disco seventies .

now in the post-bubble Millennium : most shops accentuating luggage, fake brand-names, made-to-fit suits and leather clothing, and plus-sizes are still there but the people have changed .
surely the handed-down shop-owners who atest to stay and ride-out a changing generation, but also the tourists who’s original G.I’s are seldom, now Japanese changing hands with Chinese and all the cultures beyond South-East Asia .
Oh then there are the young, local Koreans who now come here expecting the most international yet affordable cuisine 0o0 that is, on this West-side of the hill .. for East-end is posh-side : rivalling prime eateries in riche KangNam, just South of the Han River, accentuated by SamSung conglomerate’s very own Art Museum .

having lived in several continents we are based here for transactions now mostly in Japan and China . initially we chose the Port City of Busan or formerly Pusan, for closer airport access but more bargains abound out of Kimpo & InCheon Airports . next stop ? hopefully Laguna Beach CA.or Key West FL.'”V”‘

set-up in February 2009 I will bring over relevant contents from our other sites & post boards . we are graphical people so most will be based on maps, scheduled in calendars and explained in pictures eventually .

( January 2012 Update ) iTaewon BLog will widen its geographic boundaries to cover surrounding areas that effect its citizens in Reality :

( November 2013 Update ) this, the smallest of my Korea-related BLogs, will be the test site for “responsive” themes equally accessible via iPhones and iPads : so expect occasional shifts in menu and layout .

( November 2016 ) relocated to GeonDae (short for KonKuk University as HongDae is for Hong-ik – the still mixed-spelling between ‘G’ and ‘K’ comes from initial pronounciation facilitated for Americans during the Korean War) the major shopping, hotel and hospital complex North of the Han River, when many popped-up South (literally translated from GangNam) as the newer roads were wide and formed in blocks . do not miss much, as we found no real foreign restaurants in iTaewon in true taste nor at-heart aside from trying to capitalize on local alien curiosity which lit the any-thing goes fusion-age .

will keep-on updating this BLog as topics on iTaewon rises, which will as the streets and the people who come change with time but will always be unique from its core origin //

I’m trying to find the DMZ store. I was told it is near FootLocker. I was trying to look on a map to see where FootLocker was. Do you know if the DMZ store is still around? If so, which exit towards Foot Locker?

two-decade-old military store DMZ is located INSIDE the “baggage alley”
which is mid-point between SEOUL Subway Line 6 NokSaPyeong Station Exit 3 AND
iTaewon Station Exit 4 : you will un-mistakably come across an alley with luggage stores on both sides .

on our iTaewon map on top menu : it is at the entrance to Area 8,
and further you will find “Louisiana SeaFood Restaurant Boiling Crab Restaurant” posted last November .
it has lost much of its luster in the eBay age and now a handful of neat domestic On-Line Shopping sites dedicated to such . still there are more selections in neighboring Japan, where surplus hobby began much earlier .

Hello this is dark’n’flirtatious iTaewon BLog Pilot trying to be the R-E-A-L Rhapsody Angel and as I am a believer of stern history even in this age of relentless Chatt : I update more of my previous Pages and Posts than register NEW ones, so keep comin’back if you don’t find what’ya lookin’for, plus I enjoy replying excessively on certain questions on Comments below~