BoGwangDong is as old and humble as it gets in the Capital of technically advanced South Korea, formerly tucked over NamSan (South Mountain) and now roughly the center as much of newer institution and residence have moved South of the Han River . it is a rather poor residential area bordering on the classic expatriate residence of HanNamDong, where foreigners are dominantly Middle Eastern .

a single alley criss-cross North-South through BoGwangDong : narrow but considered the main road for the whole of BoGwangDong East of here spider-webbed with even narrower alleys, where only the local YongSan Village Bus #1 make through the iTaewon Subway Station – SoonChunHyang Hospital – HanNam Subway Station triangle .

and because it is of older generation : more Korean eateries abound including dog-meat (consciously hidden behind the alleys from 1988 SEOUL Olympics in view of international eyes, but now back again onto the front over the Millennium, like :
“who dare’s gonna stop us”) except for the two local bakery franchise – Tous Les Jours atop the hill across Polytechnic University and Paris Baguette at its lower entrance and bus terminus .

it is here toward the lower end : Korea’s own MacDonald’s and Burger King : Lotteria (of Japanese-Korean conglomerate fame) is opening, now making it the center of BoGwangDong, as its Police Station is right across, where its Post Office is right behind 😉 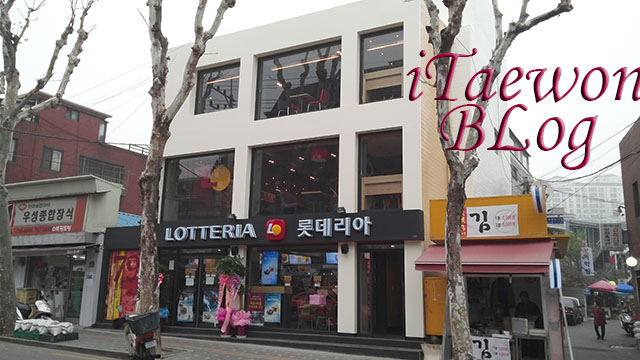