I once lived in gaie Paris in pursuit of Ernest Hemingway’s “A Moveable Feast” and the most re-assuring moment was just before sun-rise : when you could smell baking bread from the boulangerie behind your street . and now on the opposite side of the Globe : in a quick-developed nation with quite tasty barkeries – but most using transparent wrap – they open quite late towards noon . and here its sacred name translates as (ringing) bell of (the Month of) May 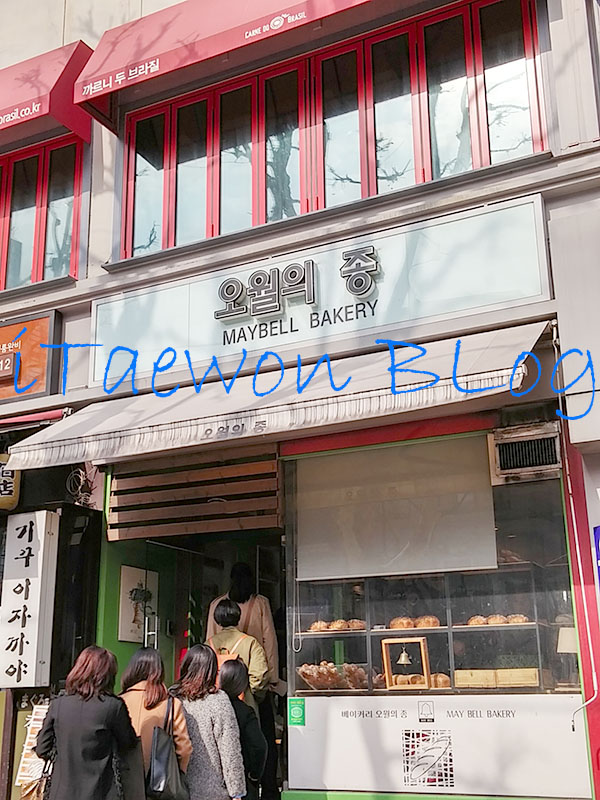 what if in the middle of ever-lasting recession : You had a store to gradually open at 11am – to find eager customers already lined-up, then close mid-afternoon for most of your products will be sold-out ?

there are about a dozen popular bakeries around the Peninsula mostly concentrated around Metropolitan SEOUL : mostly spread by mouth Oh, I mean through Korea-wide chat and messaging to inevitably be hailed by some trendy media – then more chic ladies and riche house-wives to gather – some whose in-house lessons are soon sold-out . amazingly, and because it is such neighborhood : two of them are located across each other in iTaewon – ofcourse NOT the G.i., queer and cheap luggage sector of the West but over the hill onto the East where the more exclusive restaurants await with valet parking .

it very easy to miss, as it is a very small shop . I had past this place many times, especially one of the few Swiss Freitag recycled bag seller is just across the street, but either it was lined with customers (from about 10:30am) or closed early (around 3pm) with a “SOLD OUT” sign . but be-hold : perhaps amid local MERS virus scare : it was open one late afternoon ! ofcourse once inside : the shelves was like a Jewish bakery in Europe just before Nazi occupation .. almost wiped-out -_-

– And Let this be Thou Bread, iTaewon BLog –