there are quite a few famous restaurants or rather eateries in iTaewon, once touted as the baddest place where Western influence flowed from the base near-by, now just another queer place in the age of W10,000 per-day Wi-Fi roaming where NO news is surprising .. and as you get out of iTaewon Subway Station Exit 3, past the police station where a lady officer is stationed, and after StarBucks turn right just before the Fire Station : is the infamous hooker hill on the way to Central Mosque where all Arabs in South Korea meet . here just up-hill past another G.i. land-mark : King Club, and before you turn Left towards the Mosque is a well-known grill house where people of all ages flock to . (actually it is right next to another well-known barber shop, in an area where most hair salons specialize in wigs for trans-sexuals) 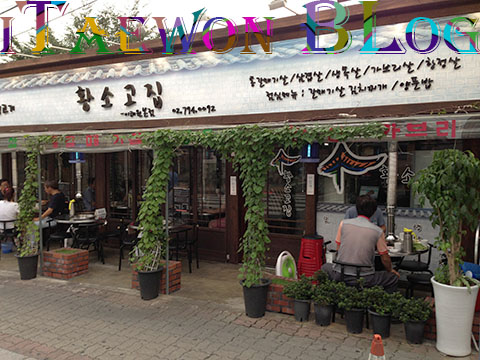 first thing you notice upon entering are the exhaust fans on each table, which from the very start they put in the fire, they will lower it to almost touch the grilling meat – understandably-so for if NOT the whole place will be in smokes ! and a generous, do-it-yourself salad buffet, Korean-style : 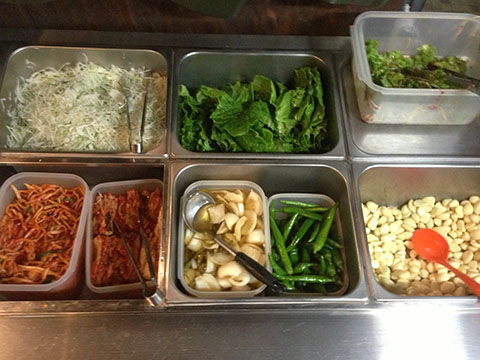 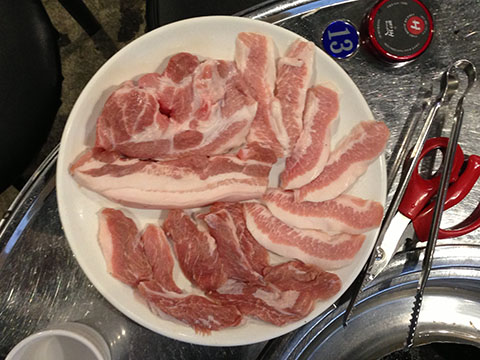 the restaurant name means beef in Korean, but their specialty is more pork – and all parts there-of . a dish intended for 1.5 person costs W15,000 and the port assembly above 5oo grams from 4 portions, cost W30,000 then below grilling beef for now : as you will experience it is this charcoal heat that makes such tasty meat, but be careful to turn-over the meat often and quickly for if NOT it will smoke black in a matter of minutes 0o0 and I have found from next-table seaters and by experience to lower the smoke tunnel – that extrude down to the top of each table – down as close to the table as possible to keep the aluminum grill from burning and smoke extruding . 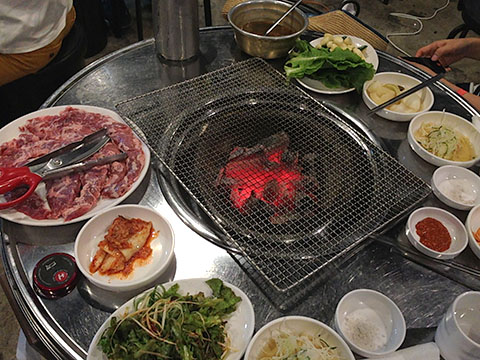 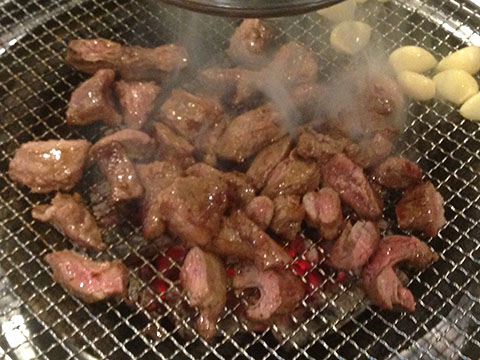 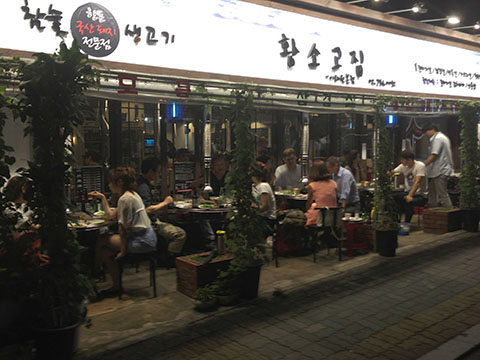 in the end there is about only one down-side especially if you are well-mannered and sensitive to noise, as the whole place is full of it where every-one has to shout to understand each other . and after dinner on this pleasant hill you have many places to go there-after smack in the center of iTaewon, where G.i.’s, GLBT, English teachers and curious Koreans cross path .