The Korean Peninsula has been experiencing steaming-hot weather this year, as high pressure around has pushed rain to the South thus delaying annual Monsoon Season . more-over each day has been recorded as the hottest this year right up to today . and yesterday Friday : New York’s dearly popular Shake Shack opened its first branch is a busy-street in the middle of GangNam . youngsters have been lining before opening, after which even the American Ambassador attended its opening and long lines even today – although many companies have now accepted the Western Weekend-off, most office still work until 1pm Saturdays . most wait is around 2:30 hours ! 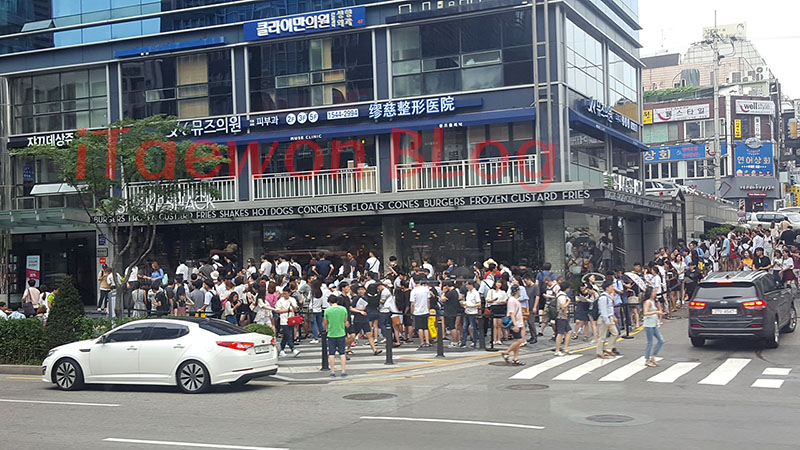 plus there are many things to do while you are here in a popular intersection :

However Shake Shack in Korea is NOT operated by States-side Shake Shack directly, rather purchased by Korean SPC Group and run as a franchise, side-by-side as their many bakery and fast-food joints like Paris Baguette and Dun1in Donuts . meaning : it would be unlikely SPC would import Shake Shack’s prized fresh patty and bread, but instead could use their own package Shany bread line .

South Korean hamburger joint is monopolized by Lotteria with about 1200 branches, MacDonald with 450 and Burger King with 240 . local fresh patty Kraze Burger which opened early 2000 ‘s has gone bankrupt in 2013 . Korean conglomerate Shinsegae brought roller-skating Johnny Rockets over in 2009 which is now stuck in a back-alley without much customers .

So although the current lining-up crowd may be a fad than die-hard fans, and those who want to upload photos of their experience to their blogs and social networks, its only way to survive may to roll along a prestigeous trend-maker as StarBucks is doing //